When Kintaro Hattori founded his company in 1881, he was just 21 years old. During his fifty years at the helm, Seiko became the leading watch company in Japan, with its own design and production facilities. This achievement was a direct result of his single-minded vision that Seiko should be "Always one step ahead of the rest". His words resonate still and continue to inspire Seiko today. Throughout this year, Seiko will release a series of creations that embody the spirit of Kintaro's words and honour the 140th anniversary of the founding of his company. The celebrations start with a series of Prospex, Presage and Astron watches inspired by the landscapes, seascapes of Japan.

Today, Seiko Presage Sharp Edged Series introduces a limited edition watch inspired by dawn.The gold colour accents of the indexes and hands are set onto a black dial so as to be reminiscent of the sunlight at dawn.

Black hard-coating is applied to the stainless steel case and the bracelet, which echoes the dark sky before sunrise. The gold hands and indexes represent the morning twilight of early dawn, and the gradation on the dial foreshadows a new day.

The dial incorporates a Japanese Asanoha or hemp leaf pattern, familiar in Japanese culture for its use in design since the Heian period over a thousand years ago. The Asanoha leaf was traditionally used as material for fabrics and the pattern holds a special importance in Japanese culture as it symbolises rapid, strong growth and was thought to bring good health, especially to the young. The rich texture and intricacy of the dial's sharply edged geometric pattern create a subtle colour gradation as they play with the light at different angles.

The Seiko Presage Sharp Edged Series case and bracelet incorporate many flat surfaces that have a modern sharpness that allows the watch to shine and sparkle from every angle. The precisely engineered and polished surfaces and the crisp edges of its silhouette contrast with the subtle hairline finish to create a pleasingly multi-dimensional effect. 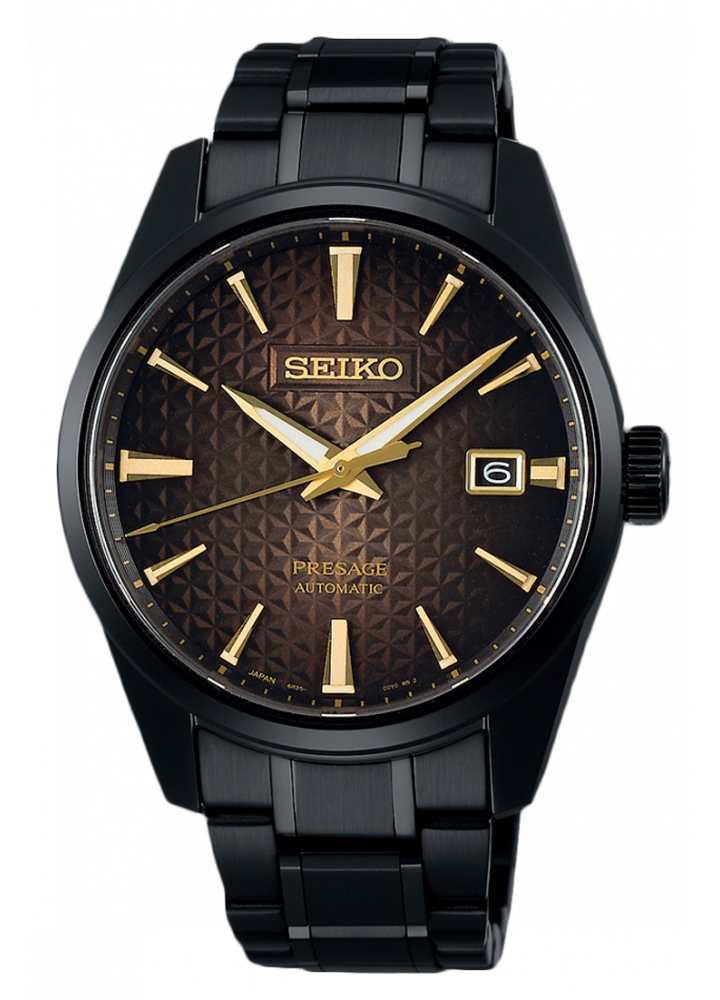 Created in 2020, the SPB205J1 Presage 140th Anniversary Limited Editions is also part of the latest "Sharp Edged Series". It combines flat surfaces with sharp angles that, together, allow the watch to sparkle wherever the light strikes. Like others in this series, this new creation has an Asanoha or hemp leaf pattern that has been used for a thousand years and more in Japanese fabrics. The gold color accents of the indexes and hands are set onto a black dial so as to be reminiscent of the sunlight that illuminates Tokyo in the early dawn. Whether on the stainless steel bracelet or the alternative black leather strap that is also included, this automatic Presage timepiece offers a very different, modern perspective on Japanese aesthetics. It is a limited edition of 4,000.